There’s a New Book of Travel Writing You Should Read 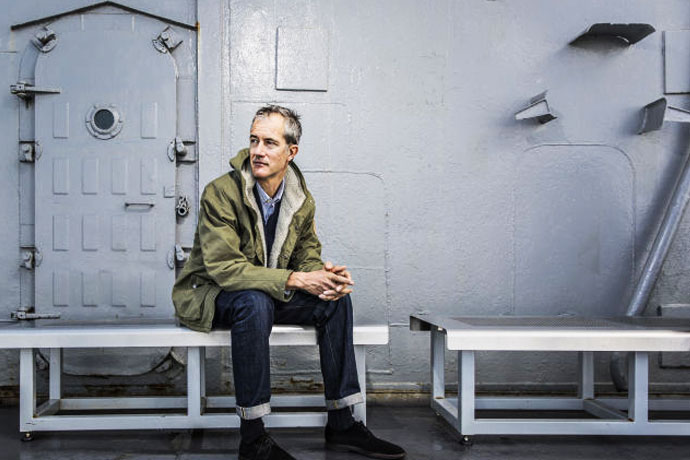 Known to some as literature’s “slacker laureate,” Geoff Dyer is a prolific fiction writer, essayist and traveler, as well as the possessor of a rather mellifluous British accent.

His latest collection of travel writing, White Sands, comes out today, and contains, amongst casual philosophical musings and high-minded meditations on art, one of the most compelling (okay, only) stories of not seeing the northern lights we’ve ever read.

Ahead of the book’s publication, we caught up with the Englishman to talk romance in the Forbidden City, Instagram culture and his personal notions of paradise.

It all begins right... here.

We wanted to start with the note before the book—about this being a work of both fiction and nonfiction. Why did you make that choice?
I wrote the note after I finished the book, almost as an afterthought. It’s an accurate description of what’s going on, as it really is a mixture of what is categorically defined as fiction and nonfiction.

But the main thing was an attempt to determine how the book was read. Travel books tend to come in a tried-and-tested, rather homely form. It seemed to me that my definition of a “travel book” should depart from established ideas of form. I like the idea of it straying or parting or moving away from the assumptions readers might begin with.

Your book asks what certain sites, monuments or relics, already charged with meaning—like Spiral Jetty, the Watts Towers, Egyptian mummies—are really trying to tell us, and what we go to them for. Did you set out to tackle these questions or did they arise naturally as a consequence of your travels?
I think it arose when I was looking at some of the bits and pieces of what I had [written]. It became very obvious to me that that was one of the themes. More than that, even, it seemed like it was a theme that came through all my books. It was an accidental product of the travel, but a very obvious product of the writing about the travel.

And why do you think you’re drawn to these sorts of places?
To sum it up one way, I’ve always been drawn to places where history becomes manifest in geography.

I’m also interested in the human dramas that continue to happen and weave themselves around these places. The classic example of this in the book being the chapter on the Forbidden City [Ed. note: You know, the one in Beijing], where there’s this ancient, long-standing place, but what I’ve told there is a very contemporary and very transient romance.

The theme of “disappointment” comes up frequently throughout the book. You devoted an entire chapter to documenting an experience of visiting the northern lights only to not see the northern lights. Why is it important to embrace disappointment in modern travel?
Well, I think you have to be prepared for it, because it’s just inherent in the experience of travel. It’s so common to get to a town and arrive at the museum on the one day that it’s closed. There’s that circumstantial disappointment. And then there’s the disappointment for which you can’t really “fake orgasm,” as it were. For me, I wrote about this before when I visited the Rothko Chapel in Houston. It’s a place with a very mythic reputation, and it just didn’t happen for me. I couldn’t claim from my personal experience that the Rothko Chapel was this great place.

Having said that, one of the amazing things about the American national parks is that they’re never disappointing. I think quite often any place in the natural world that’s reckoned to be really amazing tends to be.

There are several meditations on photography in the book, particularly as it pertains to travel. What are your thoughts on Instagram?
In a way, I don’t have any because I’m not of the Instagram generation. Not only that, I’m not always taking pictures. I’ve always just preferred to give myself to the experience as opposed to doing whatever’s necessary to memorialize that experience.

It is something that’s so pervasive now, whereby you’ve got to photograph yourself doing something to prove you’ve had the experience. On the one hand, that does seem like a very contemporary thing. But I’m very conscious of the fact that D. H. Lawrence wrote an essay in the 1920s or something, complaining about this very tendency. So what we’re experiencing now is just a belated, highly advanced technological manifestation of something people have been worried about for quite some time.

You write about paradise being a place that is untouched by history. What’s your personal paradise?
Well, there are lots. If I could go there every day, it’d be great to go to Deadvlei in Namibia. It’s this dry lake bed, completely white, with a few black dead trees in the middle of it, surrounded by bright-orange sand dunes—huge, great sand dunes—themselves set off by this blazing blue sky. There’s no history there at all, because it’s pretty well uninhabitable. So you’re seeing something that’s been unchanged for a million years or something.

It seems like you’ve been to a lot of places and examined them with a critical eye. What is one place that still perplexes you?
I’d go back to Varanasi. It’s one of the most intense, most wonderful places in the world. I find it endlessly interesting. But I really don’t want to go back there, because I’m frightened of getting sick. It’s certain I’m going to get sick in Varanasi, it’s just a question of what I’m going to get sick with. [Ed. note: Varanasi is a city in India, and is often regarded as the country’s spiritual capital.]

What’s the next place on your list?
It just so happens that every time I see a picture and go, “Wow, that’s an incredible-looking place, where is that...” it always seems to be of Iceland at the moment.

Are there certain books you gravitate toward when you travel? Any must-reads?
It depends on where you’re going. But I think, as a general note, it would not be a travel book at all. It would be The Names by Don DeLillo. It’s just one of the great, great pieces of writing about foreign places.

There’s a pretty tense moment in one story where you realize the hitchhiker you’ve picked up could be an ex-con. What’s the most frightening experience you’ve had while traveling?
Hitchhiking is one of the great things in the world and it’s a shame it’s dying out. I did a ton of it in my 20s.