Beer and Games from the Seven Grand/Varnish Crew 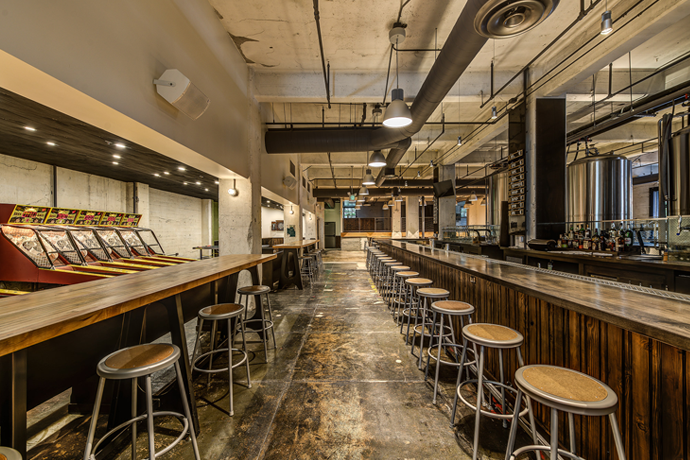 12 Photos Arts District Brewing Company
This is a story about the three B’s:

It’s the Arts District Brewing Company, a sudsy new realm for good beers and all your favorite bar games from the owners of the Varnish, Seven Grand and every other Downtown place you like. It’s now open, and here’s the slideshow.

Like the name implies, it’s a brewing company in the Arts District. A 17,000-square-foot one for you and your friends to occupy on an upcoming Saturday afternoon. That way, you can try one of their first beers. Outside on the patio. So your rye IPAs and imperial porters can “breathe.”

Things only get better from there. For instance, if someone’s stomach growls, they can hit the takeout window for one of Neal Fraser’s bacon-and-beef-blended burgers or jalapeño chicken dogs. See. Better already.

As beers go down and laughter surges, pull someone you’re flirting with aside to tour the game room. Bypass the giant Jenga and darts for one of the 10 restored vintage skee-ball machines.

Plus, the bar is offering sign-ups for a national skee-ball league called Brewskeeball.

Brought to you by the letter B.