Memoirs of a Kisha

An Umbrella That Talks to You and Everything 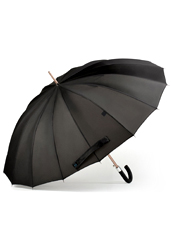 There’s no such thing as an umbrella doctor.

That would be silly.

Plus we don’t know of any institutions of higher learning that offer an umbrella doctorate program.

Plus the poor guy would have, like, no patients.

But if there were, he’d probably prescribe something like Kisha, a virtually indestructible umbrella that also connects to your phone so you can’t lose it, now available.

You’ve probably always thought there should be an umbrella that talks to you. Maybe not. Maybe you’ve never thought that until now because that’s more normal. Regardless, here it is.

It won’t rust. It won’t break. It won’t rip. And, most importantly, you’ll never leave it in a bar because it’ll tell you not to through your phone.

Yeah, it connects to an app that reminds you if you’re walking too far away from it. It also keeps an eye on the local forecast and automatically notifies you if you need to bring it to work in the morning.

We believe “Thanks, umbrella” are the words you’re looking for.

Gear
10 Things to Help You Stay Calm Today
If the Scream Pillow Doesn't Help, the Wine Will

Gear
This New Helmet Purifies the Air You Breathe
It's Part Mask, Part Face Shield, and Has Built-In HEPA Filters