Playing Ping-Pong with a Soccer Ball 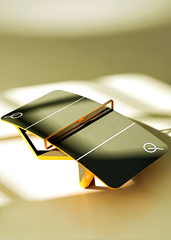 You see, when two people love each other very much, they get close.

And they unite in a way that’s meant to bring something new and beautiful into the world.

And when two sports love each other...

Well, you get Teqball, a new and symbiotic union between ping-pong and soccer. It involves important innovations in the field of leisure studies, a specialized table that’s available online now... and you.

This is going to revolutionize soccer. Or ping-pong. Or tables. We don’t know. The future is uncertain because it’s so new.

There’s no field—just a concave-shaped table. And there aren’t 22 players—just two or four. And it’s played a lot like ping-pong—just without paddles. And somehow, Christopher Walken hasn’t starred in a movie about it yet.

And if you don’t even try, you... actually still win.