Tournament Nights at the Spare Room

A Weekly League of Gentlemanly Gaming 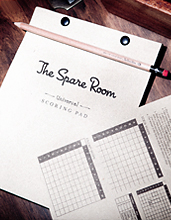 At its finest, cinema can engender a profound reverence for history.

You may have guessed we’re talking about Battleship.

Finally, somebody threw hundreds of millions of dollars (and some aliens, and Rihanna) at fully exploring the glory days of you calling out C-6...

When really, they could’ve just gone to Tournament Nights at the Spare Room, a weekly new league of gentlemanly gaming—yes, this involves board games—kicking off tonight in the depths of the Roosevelt.

Think of this as a classier take on trivia night. But instead of answering queries about, say, Costner’s early work, you’ll be competing in a bracketed Battleship tournament. (That one’s tonight.) Or maybe dominoes, backgammon or Connect Four—it’s a different game every week, each played with custom boards and pieces. (Even the dominoes are engraved with “SR.”)

And instead of some dive bar, your environs have been upgraded to the regal sunken lounge next to the lanes of the world’s nicest bowling alley. (Nothing against your favorite dive bars, but sometimes you just need engraved dominoes.)

It wouldn’t be a proper tournament without a trophy. Note: there’s no trophy. But winners will get their hands on Warby Parker glasses, Herschel Supply Co. gear and the occasional generously spiked punch bowl.

Which should tide you over until the Candy Land movie.