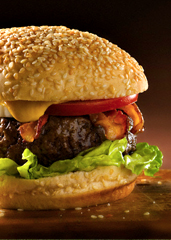 There’s been a lot of focus lately on what you’d like to get from people later this week. And rightly so.

But that’s meant precious little attention to what you want right now. The answer, of course, is the same as always. A cheeseburger.

Fortunately, there might be one rolling past you or pulling up near you right now.

That’s because Dorothy Moon’s Gourmet Burgers is on the scene, now slinging meat patties around town.

There isn’t a whole lot of mystery to the menu here: they serve old-school, griddle-cooked burgers from a truck. The name, however, holds plenty of mystery: it stems from an unexplained, late-night phone call by an elderly woman of that name.

Next time you stroll up to this big purple truck, you can strike up a conversation about this cryptic origin story as you build your burger. (Or just build your burger.) What you know you’ll get is a four-ounce patty (you can also make it a double) made from ground beef and steak trimmings cooked medium to medium-well and served on a potato roll.

From there, it’s up to you, as they’ll toss on—gratis, no less—everything from sriracha sauce to teriyaki mushrooms to a fried egg.

A Sleek New E-Bike You Ride on the Water

You Can Vacation with Hafþór Júlíus Björnsson