How to Swim Faster than Phelps 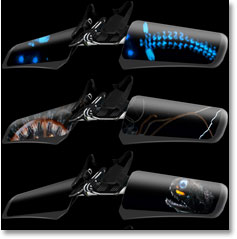 Now that it's all over, you've gotta hand it to Phelps—eight gold medals, not bad.

But it's got you thinking about how you could cut through the water even faster. So instead of, you know, decades of training, you're now looking into a Lunocet Monofin.

Once you strap both your feet into the single carbon-fiber fin, you'll suddenly feel a little more futuristic and a lot more...dolphin-ish. The company's designer would tell you that's a good thing, since he spent years studying dolphin movements to make his advancements in the field of human-flipper technology. (Research you supplemented as a child by watching lots of Flipper.)

After a customization process to make the design your own (and maybe a bit of adjustment to the whole swimming-with-a-fin thing), you'll hit eight miles an hour in the water, according to Lunocet. You might even be the one to go "full breach"—swimming so powerfully that you can rise up and clear the water completely, a dolphin feat no human has yet to accomplish (not even Phelps).

Of course, the site also claims that mermaids are real. We're pretty sure they're kidding about that.

But if not...guess the fin will give you two something in common.

A Minimalist Cabin You Can Put Anywhere

Gear
The Jetwing Lets You Fly Like Iron Man
The Future Is Personal Flight. And It's (Almost) Here.

Gear
The Nicest Wood-Fired Hot Tub You Ever Did See
Come On In, the Water's Warm

Gear
A Sit-Down Segway for Zipping Around Town
Soon, Walking May Become Obsolete

Gear
A Smart Stash Box for Storing Your Weed
It Looks Like a Discreet Alarm Clock, but... It's Not