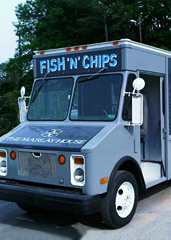 It’s literally out of control.

In a good way, of course. But at this rate, it’s only a matter of time before a food helicopter shows up hawking fresh-shot grouse and lemon Tang.

But until that super-awkward day comes, here’s the next big thing...

So yeah, a fish & chips truck. And it all started when the pint-slinging Dubliners over at the Marlay decided it was high time to take their act on the road.

They’ll start out by hitting the festival circuit. Hard. So expect sightings at the aforementioned Art-B-Que for starters, followed by Decatur’s first-ever street food fest on the 14th. And once they get their bearings, they plan on hitting the open road as well, so you’ll definitely want to keep an eye on their Twitter feed for updates.

But as for this weekend, somewhere between commandeering beer tents and your stunning karaoke rendition of “Danny Boy” (you brought your own machine), you’ll want to look for the handsome gray truck with the words “Fish ‘N’ Chips” emblazoned above the windshield.

And you’ll want to consume some of those. But you’ll also be privy to things like Guinness-Braised Brisket and pretty much whatever else they feel like making that morning.