Keeping a Watchful Eye on Your Office 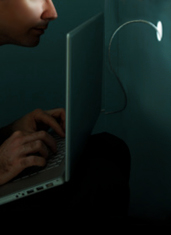 It’s good to be the boss.

And we’re not just kissing up here, but you wear the title quite well.

Team-building exercises in the South of France: sure. That putting green/bocce court in the spare boardroom: your idea.

But lest your loyal subjects mistake your kindness for weakness, you might also want to make sure they’re actually working.

Allow us to suggest espionage...

Or at the very least a new website called DeskTime, which lets you track your employees’ productivity with ninja-like precision, available now in beta.

Think of this as your own personal Big Brother, ready to be deployed at a moment’s notice into the secret lives of those on your payroll. To be clear, this isn’t some type of creepy man-behind-the-curtain scenario—but let’s just say that if the new intern is spending more time keeping up with the Kardashians than your Q2 budget projections, you’ll be the first to know about it.

Once you’ve installed this thing on your own PC or Mac, you’ll send an email link with instructions to the employees you plan on... taking under your wing. (Yes, you just invited them to their own funeral.) From there, you’ll be able to see when they logged on in the morning, check whether or not they’re working on productive applications and track their overall efficiency as compared to the rest of the company.

Lucky for them, you consider boardroom bocce a productive activity.

Gear
This Luxury Catamaran Has an Attached Submarine
Sail, Sunbathe and Explore the Ocean with Aquanaut

Gear
An Underwater Sea Scooter for Exploring the Ocean
It's Small, Portable and Does All the Work for You

Gear
See the Stylish, Space-Saving Furniture That Magically Rearranges Itself
Your Bed Is Floating. Your Closet Is Moving.

Gear
The Two Futuristic Grills You'll Need This Summer
One Does It All. The Other Goes Wherever You Go.