The Potential Arrival of the Toaster Printer 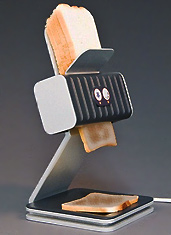 We’ve seen the future. It’s a strange and fascinating place, filled with technological advances too dangerous or mind-blowing to go into production at the present time. Take this design—still on the drawing board, but too game-changing not to share. Please use this advance intel for good...

And yet you never considered combining these two poles of your life: the kitchen and the office, the sensual and the verbal, fire-branded grain and the thrill of the written word...

The toaster and the printer.

Introducing The Toaster Printer, a printer-shaped toaster, planned for production as of... someday. (We hope.)

It’s the next great leap in toaster technology—whenever the rest of the world catches up. Instead of pushing your bread into two slots, you’ll stack it in a line on top of this magical device. Push the print/toast button and, one by one, the slices will drop in and slowly emerge as the toast you so crave. (Presumably, the jam/toner cartridge is still under development.)

There’s a second button to adjust the browning, but otherwise that’s it. So far, there’s only one in existence, but it’s been winning design prizes across Central Europe based on its heretofore unprecedented combination of print and toast technologies.

To be fair, the Swiss really love toast.

Gear
10 Things to Help You Stay Calm Today
If the Scream Pillow Doesn't Help, the Wine Will

Gear
This New Helmet Purifies the Air You Breathe
It's Part Mask, Part Face Shield, and Has Built-In HEPA Filters