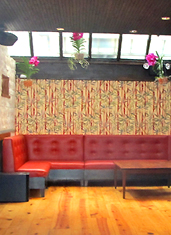 Now, this bar prides itself on concocting perfect mai tais, knows its way around a pu-pu platter and generally makes you feel like everyone around you should be wearing a coconut bra.

You would probably call this place a tiki bar.

And for the first time in a good long while, you would be wrong.

Here to introduce New York to the anti-tiki Hawaiian lounge is Lani Kai, an ode to Hawaii’s cocktailing and culinary delights from the owner of Pegu Club and Flatiron Lounge, opening next week in SoHo.

You probably guessed this was coming: no kitschy totems, no pink leis, no grass skirts. Which is fine. Because instead you’ll walk into two floors that feel like a tiny, classy Hawaiian paradise in SoHo: light wood floors, a long communal table, airy blue walls, a chandelier made of seashells and a fireplaced downstairs lounge perfect for your next indoor luau.

And while pork buns and fry platters may start flying out of the kitchen, stay diligently focused on the rum. It comes by the flight, in cocktails (like the house Planter’s Punch, made with raisin-infused rum) or in a little device they’re calling the punch pitcher, which is just what it sounds like: a punch bowl, but more upright.

Yes, the punch pitcher era is upon us.