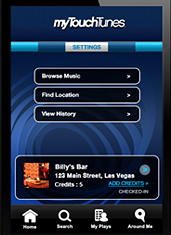 The Fonz. Surely, you’ve heard of him.

Popular fellow. Had a way with women. And motorcycles. And jukeboxes. One well-placed touch and they’d all be playing his tune. Well, maybe not the motorcycles.

Well, happy days are here again—at least for you and the jukeboxes of Chicago. Introducing MyTouchTunes, a website that gives you the power to program the night’s playlist before stepping foot in the bar.

Basically, the site gives you the ability to hack into every one of the nearly 300 TouchTunes Internet-enabled jukeboxes scattered throughout the city. (But, you know, legally... and without any Matrix-style hacking.)

That means you can program the night’s soundtrack well in advance. Before leaving the house for, say, a night of serious Guinness contemplation at Irish Oak, you’ll spend a few minutes on the site selecting just the right mix of U2, the Pogues and Van Morrison. When you arrive, head to the jukebox, type in your name and password, and your lists are waiting for you. Just hit play—or give it a Fonzie-style karate chop for panache.

And because the site also functions as a social networking site, you can share your playlists over Twitter or Facebook. Which means that your wild, multifaceted playlists can become the stuff of legend.

So maybe be discreet when it comes to the Bieber.